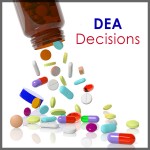 Uttam Dhillon, DEA Acting Administrator, issued a final order today in the case of the revocation of a New York doctor’s DEA registration. But its implications go well beyond this doctor’s circumstances.

Here are the basics. Dr. Jeffrey Stein was convicted of tax-related crimes in the Southern District of New York in 2015. Specifically, Dr. Stein had provided false receipts and other fabricated documents to his accountant to reduce the amount of taxes he would have to pay and, in turn, to mislead the IRS Auditor into believing that the claimed expenses were legitimate. Dr. Stein pled guilty to these charges. Of particular relevance to today’s order, Dr. Stein had used, among the fabricated materials, “the names of four disabled military veterans (including two former patients whose identities he obtained as a result of his work for the V.A, [and] . . . created bogus invoices in the names of those veterans.”

This conviction brought Dr. Stein 18 months in prison, the temporary revocation of his medical license, and his exclusion from Medicare, Medicaid, and all federal health care programs for ten years. Dr. Stein served his sentence, made full restitution to the IRS, and had his license reinstated. He appealed the HHS exclusion ruling and had the period reduced from ten to eight years. Nonetheless, the HHS ALJ upheld the exclusion and, significantly, argued that Stein had “abused his position by appropriating the personal information of four veterans (including two individuals to whom he had provided health care services) to further his tax evasion scheme.”

The Order to Show Cause

In February of this year, DEA issued an Order to Show Cause, which proposed that Dr. Stein’s registration be revoked because of the HHS exclusion. Dr. Stein waived a hearing and issued a written statement in response. Among other things, Dr. Stein argued that he had served his sentence, made restitution, had his medical license reinstated, and taken responsibility for his conduct. But, in words that would come back to haunt him, he stated that “the two counts to which [he] pled guilty . . . pertained solely to [his] personal income tax statements.” He also noted that “[there] were never any allegations of impropriety with respect to [his] medical practice or the furnishing of or billing for medical care, services, or supplies.”

The Government argued that the HHS exclusion required – not provided justification for, not permitted, not served as a good reason to – but required the revocation of his registration. The Administrator makes short work of this argument, noting, among other things, that the CSA’s language contains the word “may” not “must” when it comes to revocation, at least in the Medicare/Medicaid exclusion context. “May” is not a word of requirement but of permission.

But the rest of his decision indicates why the government may have been seeking such a bright-line rule. In fact, the Administrator noted that its argument for this automatic revocation rule was due, in part, “to what the Government perceives as the Agency’s inconsistency in evaluating revocations . . .  particularly where the predicate crime has no nexus to controlled substances.”

No Nexus to Controlled Substances Required

The Administrator is also clear that no nexus to controlled substances is required to support a revocation. “Where the underlying crimes have a nexus to the practice of medicine, and in particular, where the crime demonstrates activity that is frequently used to divert controlled substances, such activity should explicitly be factored into my determination of whether the practitioner can be entrusted with a DEA registration.” In fact, though he finds one in this case, the order indicates that no nexus to a registrant’s medical practice is necessarily required: “I believe the charge to which Respondent pled guilty of . . . . where Respondent falsified documents in order to conceal his tax fraud from IRS officials, sufficiently demonstrates knowing and intentional misconduct to require clear acceptance of responsibility.”

Fact-based Standard: Can the Registrant be Trusted?

The Administrator’s analysis comes down to this: his role is to review the evidence and the registrant’s statement to determine whether the mitigating evidence is sufficient to make the Administrator believe the registrant can be entrusted with “the responsibility carried by such a registration.” This is a “fact-dependent determination.” The Administrator, among other things, focuses on whether Dr. Stein has accepted responsibility for his actions, his credibility in this regard, and the nature of the behavior underlying the exclusion.

After weighing the evidence, the Administrator decides in favor of a two-year suspension instead of revocation. While he believes Dr. Stein takes responsibility for his tax evasion activities, he did not, in  his statement, express explicit acknowledgement of his fraudulent use of the identities of veteran patients as part of his tax-avoidance scheme. This was a violation of trust in the context of his medical practice. “Stealing the identities of patients to create fraudulent receipts is a clear indication that Respondent lacks respect for the investigatory process and will take extreme measures to hide his illegal activity.” These activities indicate he “may be dishonest in dealing with Diversion Investigators or DEA Special Agents in the future.”

In his order, the Administrator indicates that, as Dr. Stein submitted a written statement instead of opting for a hearing, the Administrator had not been able to determine whether “his remorse is credible.” Dr. Stein may or may not have benefited from a hearing. Hearings bring great risk along with potential reward. In this case, it seems to me, Dr. Stein could have helped his case significantly by directly addressing in his written statement his remorse for and understanding of the seriousness of the falsification of veteran patient invoices. This was a critical failure unrelated to whether or not he opted for a hearing.